(John aRe a Starving electrician as suggested by a coworker and the name he choose to use in his writing.) 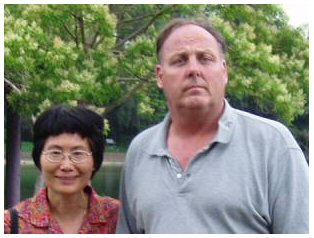 This photo taken was taken 4 years ago in Taiwan, Sophias birthplace. Sophia is a systems and modeling analyst for a major world bank. She is also a great housekeeper (she likes to buy houses, fix them up, and keep them to rent-out). Sophia makes possible John writing and guitar building although he does have to do property maintenance and with the economic times is looking again for employment at something other than being an electrician.

John is from an old New England family and an ancestors of the minister that founded the Plymouth Bay Colony -John Alden Robinson. His father started a crop spraying business in 1948 and John was born in 1950 and grew up on airport in rural New York in a farming community. He started working on biplanes and musical instruments at about the same time -age 14. Most of his music instrument work during this period was on banjos that John still occasionally plays.

John went to several colleges where he became interested in building a superior guitar. He earned degrees in Biology with a minor in Chemistry, Medical Lab Technology and Secondary Education Certification (high school teacher) He was working on a Masters degree in Education with Geology certification when he left teaching to return to being a pilot and aircraft mechanic.

In 1990 he changed occupations to be an electrician and very shortly was making more than working on airplanes and flying????

Most of Johns life he has had problems with his writing He tried three times to pass New York high school standard exam for English. It was not until latter, during his teaching he discovered that he suffered from mild dyslexia. John most of his life has sought out occupations that do not require writing but finally in early 1995 he had a driving vision and set about writing a novel. His first imaginative work Creating the Cybernetic Woman. In fairness, it was more of a novelette about 120 pages single space type written on computer that he had to learn to use, but, he did finish which is more than most people ever do. He continues to revise the work and hopes once again to bring it out. This is a quote from him in an introduction to anthology of his short stories: My Glimpses of the Cybernetic Woman

So cybernetic women are walking among us already. Perhaps you can spot one. She may take the image that haunted me before I took up my writing in early 1995. She was an attractive young blond woman -young enough to be my daughter- wearing gold-mirrored one-piece wrap-around lens sunglass. I was following her -an old man with back problems bent over with a cane. She turns to face me and I nearly ran into her. She is smiling down at hunched over me as she with her right hand reaches up and lifts her blond hair up and off the side of her head to reveal that her sunglasses temple pieces go back to a shallow domed cup where her ear would be. It becomes oblivious that the glasses and the ear cups are permanent. This was the origin of Creating the Cybernetic Woman. There was also the feeling that she was smiling at me because I had been instrumental in making her Cybernetic Transition possible and she was delighted with equipment.

John continues to write to over come his handicap and has produce a number of short stories as well as a second novel. He keeps a page of Science Fiction where other stories can be requested or downloaded on his maliposamusic.com that features his guitars.

You may write the author in the following languages english

All rights belong to its author. e-Stories.org is not responsible for from the author submitted content.